WE SEE IT ALL on the Crazy Rich Asians slot machine by Aristocrat!

Crazy Rich Asians besides being a fun movie is a fun slot machine where you win by landing the same symbol on 2 or more adjacent reels, starting with leftmost reel and depending on the symbol. The real fun, nor surprisingly, is with one of the special features of the game:

Th Jackpot Feature may be randomly initiated whenever a symbol with a diamond sub-symbol lands after which you pick until you match 3 for a Progressive award. If you find a multiplier, your Progressive award will be awarded the Progressive the number of times as shown on your multiplier.

The Wheel Feature awards you one spin of the Wheel for Progressive Awards or even multiples of certain Progressives, or the Top Grand Progressive!

The Free Games Feature is awarded by landing 3 or more scattered bonus symbol for where you select 10, 12 or 15 free games where the number of reel sets will be quadrupled, tripled or doubled respectively upon initiation of the Crazy Fortune Feature. 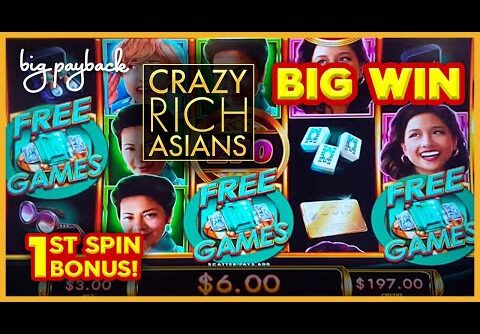