What an odd name for an extremely cool slot machine. This is the second slot that I know of that makes use of Konami’s “Strike Zone” feature, where you essentially activate the special feature per reel by buying it, which is separate from the bet multiplier. I have no idea what combination of the two is optimal with respect to the machine’s hold percentage, but imagine the math to be fairly complex to make it all reasonably happen. The special Strike Zone feature in this game is for each activated reel, any wild that lands on it fully expands!

To win in Agent: Magnifying Jackpots, you need to land winning combinations on paylines from left to right although the real fun begins by landing 5 of the same Progressive symbol on a payline, where wilds also substitute. If you do so, you are paid the corresponding progressive for EACH payline that has a 5-reel hit.

The Grand Progressive is scored by landing a full stack of ANY progressive symbol on reel 1 and wilds in the remaining reels. Obviously, having all reels activated greatly helps scoring progressives and higher bet multipliers mean higher Progressive values. It may seem rather confusing, but you’ll get it if you try it.

The Free Game Feature is triggered by landing 3, 4, or 5 bonus symbols for 8, 12 or 20 free games respectively. During the bonus, the Jackpot Chance is increased, although nothing is guaranteed, Enjoy! 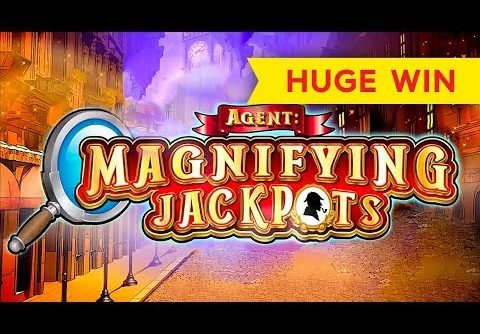