Golden Gong Cai Fu Phoenix is a great game where you win by landing 3 or more of the same symbol on adjacent reels from left to right, starting with the leftmost reel. To help, wild symbols may land on reels 2, 3 and 4. Both the Major and Grand are awarded anytime they land in the game window but only appear during bought games and the Free Games Feature.

The Free Games Feature is initiated by landing 3, 4 or 5 scattered bonus symbols for 10, 15 or 25 free games respectively. During the bonus, an alternate set of reels are used presumably giving you a greater chance to initiate the Golden Gong Feature.

During the feature, additional spins may be awarded by landing the special +1 Spin symbols which only appear on reel 5. Any other Gong symbol that lands has its value added to the Current Bank Value which is awarded up to 5 times whenever a wild symbol lands on the reels. You can see how this can get really interesting really quick!

What an awesome game, I will be back to this one! Like many great games, the excitement increases as the bonus continues just like Buffalo Chief, another great game that I scored an awesome Jackpot on: https://www.youtube.com/watch?v=HH_I8L2GZOQ And Wonder 4 Boost Gold Buffalo Gold Collection, where I won over $10,000 a must see video: https://www.youtube.com/watch?v=1zTtwmbuyKg 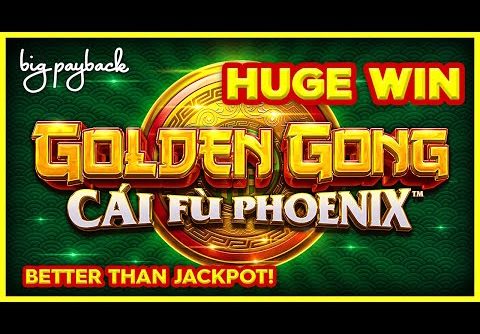