I JUST KEPT WINNING on the Rhino Run slot machine by Ainsworth!

Rhino Run is a great game especially if you like general Ainsworth style, as I do! The base game is a standard “lines-based” game where you win by landing winning combinations on paylines. In addition, Major and Minor Progressives can be randomly won at any time, as you will see!

The bonus is triggered by landing 3 or more bonus symbols which will award you one Pick of 5 different features which range from 5 free games to 15 free games. The novelty is that the less free games you chose, the more premium symbols that land in reels 2 thru 5 are replaced by wild symbols, up to all 5 premium symbols!

In addition, a new special stacked Rhino symbol is introduced, and if a wild symbol is used in a winning combination that uses a Rhino, that win will be multiplied by two!

All in all, what a run, as you will see, Enjoy! 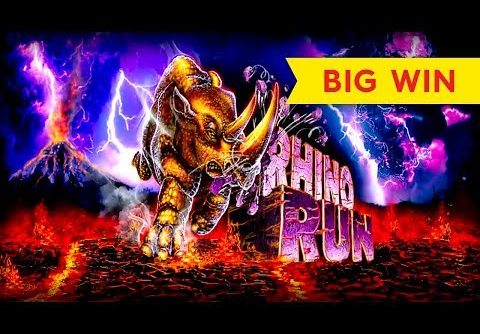