Hey guys, this was filmed in the Cosmopolitan which is one of the newer casinos on the Strip. First off was Austin Powers, played at $4 a spin. The slot was mostly sound effects and fancy graphics, it did look good, but playability wasn’t for me. The progressive jackpots were high but not so high as to appear unreachable. I gave it a good go, but I won’t be playing this one again.
Second up was Buffalo Gold, the most popular slot in Vegas by the looks of it (it’s everywhere, in loads of different styles). This version was on a giant screen which I choose as a subscriber request; ‘play the biggest slot you can find’. Unfortunately it was so big, the gameplay didn’t all fit within the video, so I promptly moved on..

I finally found it; The Simpsons! I’ve had a lot of requests for this, and considering the theme and how good it looks, I was surprised that The Simpsons slot wasn’t in too many locations.
The gameplay is very immersive, with multiple screens to over-lay the reels and bonuses. This was mostly played at $6 a spin, and was very difficult to bonus, but paid well when it did! 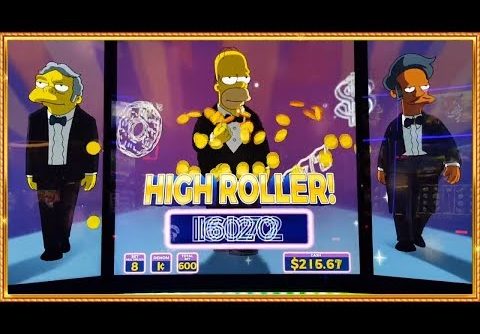 40 thoughts on “BIG WIN ON THE SIMPSONS + AUSTIN POWERS SLOTS !”