HUGE POTENTIAL on the Casper slot machine by Everi!

Don’t let the theme fool you: Casper is a serious gambler-style game and I love it. The base game has certain reel positions which are will display as stacks of symbols where the symbol is randomly chosen before each spin, a feature common to many slots.

There are three bonuses in Casper: Mystery Wilds, Mystery Quick Pick, and the Free Spin Bonus.

The Mystery Wilds feature is randomly triggered on any base game where Casper will scare off any animal symbols on the reels and they will be replaced with Wild symbols, giving you a great shot at that Big Win or Jackpot!

The Mystery Quick Pick can occur randomly after the reels stop after which the Ghostly Trio will appear and you are prompted to select one. The selected ghost will receive a credit award between 250-1500 times your bet multiplier or the Free Spin Bonus.

The Free Spin Bonus is triggered by landing bonus symbols on reels 2, 3, and 4 after which you get to spin a wheel which contains two separate reels: the first one will reveal the number of free spins awarded: 8, 10, or 12. The second reel spin will reveal the featured character symbol added to the reels: Casper, Wendy, or Trio. Free spins can also retrigger to the same number that were initially awarded!

Learn more about Casper The Friendly Ghost at TheBigPayback.com:
https://thebigpayback.com/video/casper-the-friendly-ghost/ 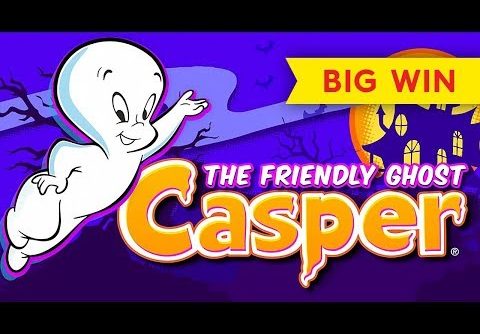