DESPAIR TO GLORY on the Dragons vs Pandas slot machine by IGT!

Dragons vs Pandas is an interesting one that’s played on two reel sets where you win by landing winning paylines on each. To help, wild symbols may land and when they do, they also jump to random positions on the same row of the opposing reel set. If a wild jumps to a position with another wild on it, its multiplier increases up to a max of 4x.

If 3 or more coins land between both reel sets, a feature is awarded depending on the type of coins that land:

If a “VS” coin lands, you initiate the Dragons vs Pandas feature where you choose a side and are awarded the winning amount of the side you chose, so choose wisely! The reels will then spin and each side is evaluated: if your chosen side evaluates to zero, a Respin is awarded. Wilds do not jump between sides in this feature.

If a “Free Games” coin lands, then you are awarded a whopping 88 free games during which an alternate set of reels are used, presumably giving you an advantage of sorts. 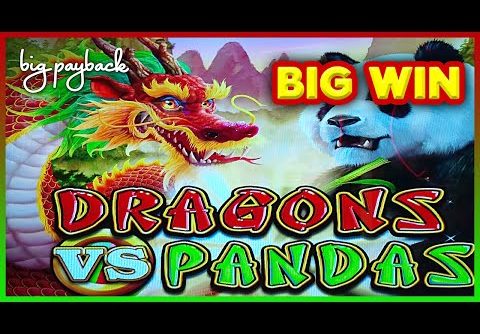