The Rampaging Rhino slot machine by Ainsworth is brilliant!

I have to say, I really had a fun time with Rampaging Rhino and loved many of its concepts. The base game is an interesting 3-4-5-4-3 reel configuration like Siberian Storm, although this is a lines-based game where you win by landing a winning combination on a payline from left-to-right consecutive reels. In addition, the special “Leopard” symbol acts as a scatter, so you just need to land Leopards in any 3 reels in order to win.

The bonus is triggered by landing 3 or more bonus symbols for 8 free games and this is where the real fun begins! During the bonus a special new “Rhino Shield” symbol is introduced and for any that land, the corresponding Rhino Mania Shield is activated for that reel. After each bonus game, a Bonus Reel spins awarding the player either 2x, 3x, or 5x your bonus win. Or, you can land the special “Rhino Mania” symbol which turns all reels that have the Rhino Shield activated wild! Finally, the last game is always guaranteed to be a “Rhino Mania” spin and in addition, you will receive one of the multipliers for that Big Win or Jackpot, Enjoy! 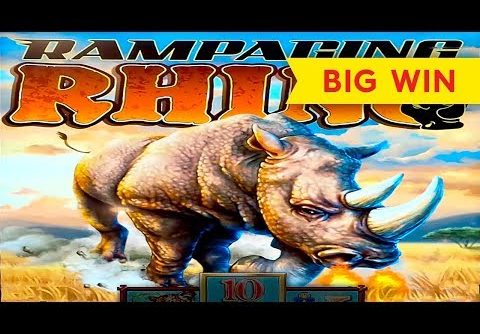