WE SEE IT ALL on the Hao Yun Lai slot machine by Konami!

Hao Yun Lai is an interesting one where you win by landing winning paylines and to help, special wild Silver and Green Dragon symbols may land. In addition, your betting affects how the game is played, where higher bets allow for full activation of “The Strike Zone”.

The Free Games Feature is initiated by landing 3, 4 or 5 bonus symbols for 8, 12 or 25 free games respectively. During this feature, the Fade Away Feature may occur may frequently with retriggers also possible.

The Pop N’ Drop Feature is initiated by landing 6 or more Dragon symbols, regardless of color, and the stacks of prizes that are available depend on the amount of activation of The Strike Zone. You are awarded 8 free spins on the active reels and if a Question Mark symbol lands, a random block of firecrackers, Credits or Progressives is awarded. If an Up Arrow lands, the Prize directly at the bottom of the active stack is awarded after which all prizes shift down. 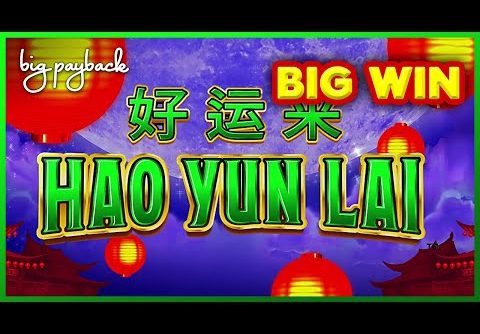