Clover Link is another “Link” game and I have to say, I really like it, especially this latest Xtreme version! I’m never tired of variations on Lightning Link as long as something novel is added, and I believe such as this case with this new series of games.

You win in the base game by landing winning paylines and to help, wild symbols may land on reels 2, 3 and 4 and any that do, nudge to fully occupy the reel.

The Clover Feature is initiated by landing 5 or more special bonus symbols where their values can range from 1x to 100x your bet along with Progressives. If you Fill the Screen, all symbols are awarded twice with the exception of and Major or Grand awards. The Grand is won by landing “Grand” bonus symbols on reels 1, 3 and 5 after which it’s immediately awarded. If less than 3 land, they transform into clovers with prize multipliers. Any Major symbol that lands is also immediately paid: you don’t need to land 5 for it to be awarded. This feature plays like Lightning Link, where you are initially awarded 3 spins and any time a bonus symbol lands, your spin count resets to 3. The novelty in this Xtreme version is that when special Double Clover symbols land, they are collected and once you collect 5, the next Clover Feature is multiplied by 2x!

The Mystery Prize Feature is triggered by landing star symbols on reels 1, 3 and 5 after which you choose one for 25x, 50x or 75x your total bet. I find this to be really interesting for high-limit players out there, think about it!

Clover Link is a fun entry into the Hold & Spin genre and I scored an AWESOME JACKPOT on the original Blazing Gems version, check it out: https://www.youtube.com/watch?v=ifRYvG9D7mY 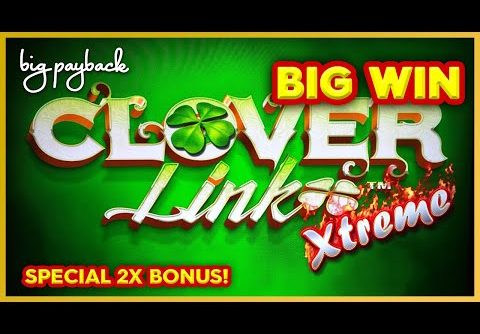