THE POWER OF THE BONUS WAS REVEALED on the Secret Power Symbols slot machine by Konami!

Secret Power Symbols is an interesting slot where you win by landing the same symbol on 3 or more adjacent reels, starting with the leftmost reel. In addition, special symbols may land with Credit Awards associated with them and any that do are awarded if in addition the special “Pow” symbol also lands.

The Bonus is triggered by landing at least 3 of these special symbols after which they lock and all other reel positions are respun and any other blank symbols that land are locked along with symbols that have black Credit Awards on them. If a symbol lands with gold Credit Awards on them, the values are awarded and those symbols are respun. One unlocked position is also chosen to include a Pow symbol and if it lands, all locked symbols are awarded and the whole process repeats!
Finally, if betting less than max certain high-valued credit award symbols may land but will not be awarded because of lack of bet qualification so you really need to bet max on this one, Enjoy! 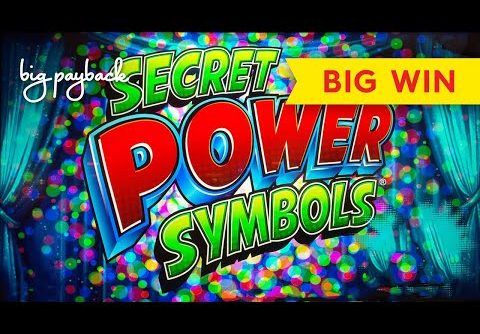