Well what can I say? Back to Lightning Link, it’s just such a great game! This time, I’m playing the Sahara Gold version which incidentally is a clone of the Happy Lantern version, which seems to be more popular overall.

The “Hold & Spin Feature” is triggered by landing 6 or more coins which can have either Credit Awards or Progressive Jackpots on them. During the “Hold & Spin Feature” you start with 3 spins and for every spin where you land at least one additional coin your spin count resets to 3, where the goal is to fill the screen. When you run out of spins the bonus ends and your coins are totaled for your bonus. If you fill the screen, you receive the top Grand Progressive Jackpot!

Surprisingly, the Major Progressive Jackpot can also be won randomly! In addition to winning it the traditional way during the Hold & Spin feature, you have a chance to also win it after any bought game where 0, 1, 2, 3, 4, or 5 coins appear, Enjoy! 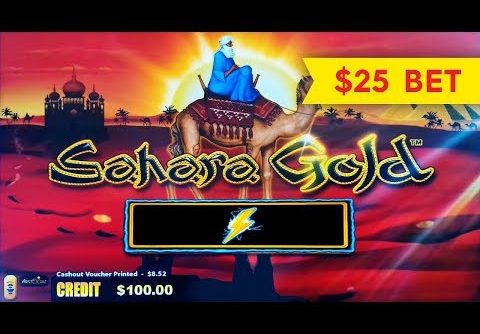