3 WILD REELS on the Mr. Cashman Magic Eyes by Aristocrat!

Mr. Cashman may be one of the first slot machines to introduce “Random Bonuses” where your bonus isn’t triggered by something that happens on your spin, but just occurs randomly at the end of your spin, regardless if you’ve won or lost!

The primary game is a lines-based game with the addition of scatter symbols, one per reel. Landing 3, 4, or 5 scatter symbols pays 5, 10, or a whopping 250 times your primary bet and I was so close to glory! In addition, special Wild Magic Eyes symbols appear on reels 2, 3, and 4 and if any land, they substitute for ALL POSITIONS on that reel, with the exception of the scatter, which is substituted on one position only.

1. Random Spin: Mr. Cashman randomly spins one or more reels then all wins are paid per the usual rules but multiplied by 3, 5, or 10!

3. Random Bonus: Watch Mr. Cashman give you a bonus prize of up to 25000 credits multiplied by your bet per line.

5. Poker Machine: You will win a bonus prize up to 999 credits multiplied by your bet per line!

All in all, what a great session where I was close to having it all, twice! Enjoy! 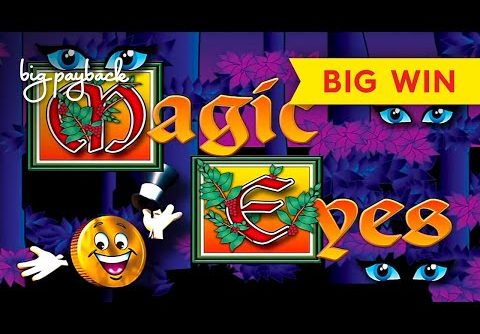