Ocean Magic Grand, like it’s predecessor Ocean Magic, allows for two styles of play: Standard and “Bubble Boost” although if you choose the Bubble Boost style, you will need to double your standard bet but gain the benefit of having up to 30 bubbles placed on the reelset including the Big Bubble! If a bubble lands on an Ocean Magic symbol, which is the Top Symbol, that position and all positions around it become wild! And if the Big Bubble lands on an Ocean Magic Symbol, it expands to even more screen positions! After each spin, all bubbles float up one position until they move completely off the screen.

The bonus is triggered by landing 3, 4, or 5 scattered bonus symbols awarding 5, 10, or 20 Picks respectively. Each pick will then award either Free Games or more Picks, for up to a total of 150 free games. During the bonus , bubbles start on reels 1 and 5 and an alternate set of reels is used, and presumably more bubbles also land on the reels. You can retrigger, and if you do, another Pick Feature is awarded!

The two main differences that I see between Ocean Magic and Ocean Magic Grand are that the reels are larger by 50% and the addition of the Big Bubble feature, which is great addition to add to the fun, as you will see, Enjoy! 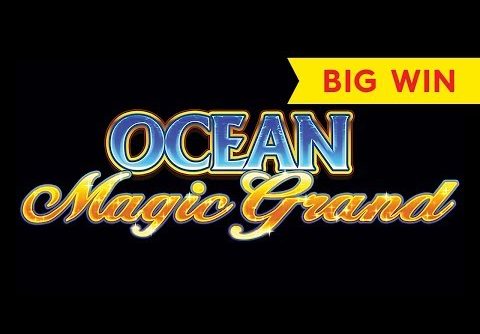