2 RUMBLES IN THE BONUS on the Fu Dao Le slot machine by Light & Wonder!

The base game in Fu Dao Leo is generally a scatter-based game where you win by landing the same symbols on at least 3 consecutive reels from left to right starting with the leftmost reel although there is also a lines-based high limit version out there too. Additionally, if any wild symbol partially lands on reel 3, it will nudge to fully expand on the reel.

The Red Envelope Feature is initiated by landing special bonus symbols on reels 1 and 5 for a Progressive award that resets at $100 for versions that have a max bet of $8.88.

The Jackpot Feature is randomly initiated whenever a wild symbol lands on reel 3 and the chance of it occurring increases with your bet level. You then choose coins until you match 3 for a Progressive Award although the pick is not a “fair pick” so where you choose doesn’t matter on this one.

A feature that’s now common in many slot machines is a “foreshadowing” event which is an audio and visual cue and when it occurs, you know something great will happen and Fu Dao Le may be one of the first games to do this. In Fu Dao Le this occurs when the “Good Fortune Fu Babies” make an appearance and when they do, you will either score a Big Win, have the Free Games Bonus initiated or have the Red Envelope Feature initiated. If this occurs during the Free Games Bonus, you have a shot at a Jackpot even and it’s really what you want when you play this one, as you will see! 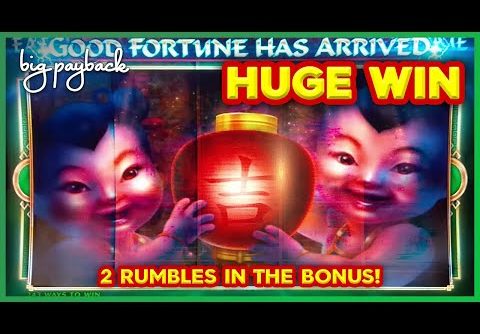