Tian Ci Jin Lu is an awesome brand that comes in two themes: Emperor and Phoenix and today I play the Phoenix version where you win by landing the same symbol on at least 3 adjacent reels from left to right, starting with the leftmost reel. To help, wild symbols may land on reels 2, 3 and 4.

The Jackpot Feature may be randomly initiated whenever at least one but less than 6 Hold & Spin symbols land on any bought game. You then are presented with a Pick Field and choose until you match 3 for either the Mini, Minor, Major or Grand Progressive!

There is a “Must Hit By” Jackpot Feature which also can be won when at least one but less than 6 Hold & Spin symbols land after any bought game. This Jackpot starts at 10000 credits and ends at 30000 credits.

The Hold & Spin Feature is initiated by landing 6 to 14 Hold & Spin symbols or randomly if you land 5, the Dragon will add the 6th! You start with 3 Free Spins and the bonus plays like Lightning Link where any addition bonus symbols that land will lock and reset your spin count until you run out of spins or Fill the Screen with 15 bonus symbols after which your total win is multiplied by 2. The novelty of this bonus is that a new special symbol may land and if it does, all Credit Awards are totaled and replace the special symbol, and all other symbols are removed, essentially “resetting” the play field! A maximum of 4 of these special symbols may land. 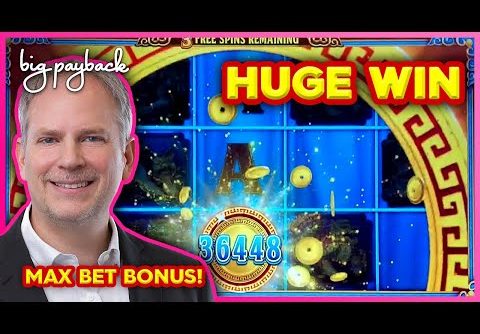