The Twice the Diamonds slot machine by Ainsworth is a classic!

Ainsworth loves to name their slots “Twice the…” something, like Twice the Money or “Twice the Gems” and I never really got the idea behind choosing such names although regardless, I still love the games!

Like mainly Ainsworth games, things get really interesting in the bonus and Twice the Diamonds is no exception where you are awarded 10 free games for triggering the bonus by landing 3, 4, or 5 bonus symbols. While you won’t receive additional games if you trigger with more bonus symbols, you will receive a higher scatter award, up to 100x your bet!

During the bonus, any wilds like land in reels 2 and 4 remain sticky for the remainder of the bonus. What’s really interesting though is that if a special “Key” symbol lands in reel three, it becomes a ild multiplier from 2x to 8x for that spin. The Key Multiplier is defined to be the following:
Free Games 1 to 4: 2x
Free Games 5 to 8: 4x
Free Games 9 or more: 8x

One point to mention is that the Free Games Feature paytable is different than the Stand Games paytable, although Huge Wins are still possible.

Retriggers are also possible in this one for 3 additional spins, and give you a shot at that Big Win or Jackpot as you’re in 8x Key Multiplier territory at that point, Enjoy! 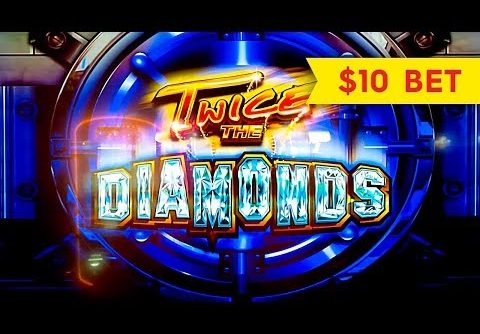