ONCE IN LIFETIME Jackpot Handpay on the Money Galaxy Pharaoh’s Power slot machine by Konami!

The “Hold & Spin” feature made popular by Lightning Link has become so popular that every manufacturer wants to get in on the action and Konami has a great version of it with their Money Galaxy brand which has three themes: Dragon’s Return, Radiant Witch and Pharaoh’s Power, which is what I showcase here!

In Pharaoh’s Power, the “Money Galaxy Feature” is triggered by landing 3 or more bonus symbols and any part of the special Pharaoh symbol which only appears on Reel 5. Upon doing so, three spins are awarded and each spin where an additional bonus symbol lands will reset your spin meter to 3, just like in Lightning Link. The goal is to “Fill the Screen” and if you do, you advance to Round 2 and then the final round, Round 3, if you are lucky to do so again! All wins at the end of Round 2 are doubled and all wins at the end of Round 3 are tripled and if you Fill the Screen in Round 3, you are also awarded the Maxi Progressive. There are also other Progressives to be won, with the Mega Jackpot possible only during the final round of the feature!

The “Fade Away Feature” is randomly triggered after any spin and wins are paid for the initial game screen. During this feature, all non-premium symbols are eliminated, symbols tumble down in any empty space, and new symbols are added. This process occurs until all non-premium symbols are completely eliminated and what’s cool is that the Free Games Feature or the Money Galaxy Feature can be triggered during this process. Players will likely be familiar with this feature as it was made popular by the highly popular Chili Chili Fire slot!

The “Free Games Feature” is triggered by landing 3, 4, or 5 bonus symbols for 10, 15, or 20 free games respectively. During this bonus, the Fade Away Feature can frequently occur, but it’s certainly not guaranteed.

Finally, the Mega or Maxi Progressive may be won at the conclusion of any bought game, just like with Lightning Link.

All in all, I’m still shocked at this Once-in-a-Lifetime Mega Jackpot Handpay Win: off my Slot Bucket List, Enjoy! 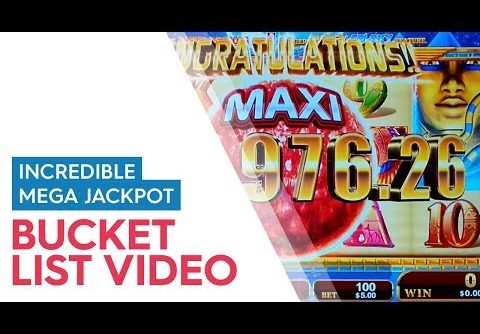