INCREDIBLE SESSION on the Celtic Queen slot machine by Aristocrat!

Celtic Queen is a really interesting game which probably suffers a bit from the confusion players may initially experience when they play the game, although once you understand it, it’s brilliant in many ways, taking inspiration from Colossal Reels games such as Spartacus and also games such as the classic Gems Gems Gems.

There are 6 different reel sets in Celtic Queen and you win by landing the same symbol on at least 3 adjacent reels from left to right, starting with the leftmost reel, on any of them. The first two reel sets are special in that bonus symbols may land, and if 5 or more land between both of them, you will trigger the Free Games Feature. Additionally, special symbols may land on reels 2, 3 and 4 and if they fully occupy a reel, the corresponding reel on games 3, 4, 5 and 6 is transformed wild! NOTE! This special symbol itself is not wild, so it can block wins on the reel set that it lands in games 1 and 2. Got all that?! It will make more sense once you watch the video and on a few spins I did something I never did before: landing almost a Full Screen on any sort of “Reel Power” game!

The Free Games Feature is triggered by landing 5 or more bonus symbols for 15 free games. During the bonus, bonus reels are in play giving you an advantage over standard spins.

Celtic Queen is yet another awesome Aristocrat retro classic and if you love these gems, check out my Aristocrat Retro Classics Battle Royale $1000 Premier Stream for 5 awesome classics: https://www.youtube.com/watch?v=Ze4NHSOafwg Another Hidden Gem I found lately is Emerald Dragon where I also scored a Huge Win on, love this game: https://www.youtube.com/watch?v=xT42ebW9BJM 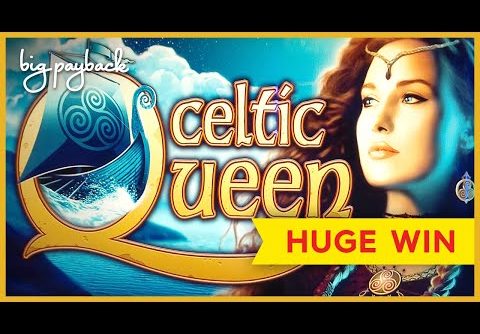