The Cheshire Cat slot machine is a clone of the Corgi Cash slot!

And what an incredible hit this was! And while it may be my lowest bet on the channel, it’s still something special to watch and there’s a story behind that: this video was taken on a cruise ship after dinner while “low rolling” instead of playing my usual high limit action! I actually got the bonus earlier in the day max betting $6.00 but had a really lousy bonus. And then I get backed-off from doing my videos! They have kids in the casino but gave me the business for doing my videos? So I started low-rolling instead: but still couldn’t miss doing a video on this one! Bust me and put me on a rowboat: I’m not going to miss this slot video!

So the idea in Cheshire Cat like most video slots is to get the bonus and here I was able to receive an unbelievable 5-symbol bonus trigger! This never happens, and honestly I don’t recall if I have ever accomplished it before on any other game! Once you trigger the bonus two wheels spin to choose the number of arrays you get to play and which reels are wild: I got the best number of arrays(4!) and the 2nd best wild reels(3- reels, one, three and five!). The only way it could have been better would have been to get the elusive 4-wild reel set which would have been a jackpot handpay, even at 50 cents! But I’m not complaining, obviously! If I had to complain, the only thing I missed was not to completely fill an array with wilds , but “I’ll take it” – Enjoy! 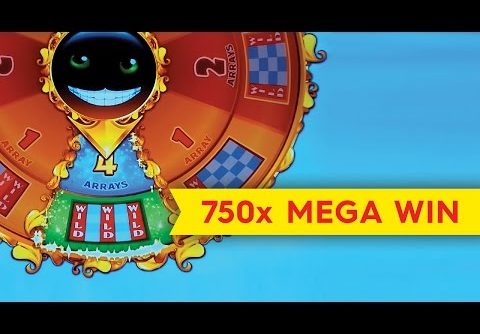