DID I JUST WIN THE GRAND on the Jack’s Haunted Wins slot machine by Aruze?

No, I did not, but you probably guessed that! But I did have so much fun on this one with all of its many features! First of all, I need to mention that Jack’s Haunted Wins is not your typical Aruze slot and I have to say I can appreciate this new direction.

You win by landing winning paylines although the real fun is with one of special features including the Pumpkin Mystery Feature(active when playing the special bet), the Free Games Feature and the Hold Spin Bonus!

The Hold Spin Bonus is triggered by landing 3 to 5 scattered Pumpkin Bonus symbols or during the Pumpkin Mystery Mega Symbol or Prize Reels features. This feature is similar to Lightning Link where you are awarded 3 spins and for each new bonus symbol you land, your spin count resets to 3. This continues until you Fill the Screen or you run out of spins after which each symbol landed will yield a credit award between 10 and 200 multiplied by your bet multiplier. If you land a Full Screen of bonus symbols, you are awarded a special credit prize between 4000 and 12000 credits multiplied by your bet multiplier. After your credit prize is determined, you receive one spin of the Prize Reel for a multiplier between 2x and 10x for your credits along with possibly a Jackpot Progressive!

The Free Games Feature is triggered by landing bonus symbols on reels 2, 3 and 4 or during the Pumpkin Mystery Mega Symbol feature after which you then select 1 of 5 choices to reveal your extra wild count of either 30, 50 or 100 extra wilds which are then added to the reels during your bonus of 8 free games!

Whenever a Wild symbol lands on the reels and the Free Games Bonus symbol does NOT land on reel 3, you have a chance to trigger the Pumpkin Mystery feature where 1 of 4 of the following features is randomly awarded:

1. Prize Reel: You make a choice and then are awarded between 1 and 3 spins of the Prize Reel for either Credit Awards or the Hold Spin Bonus, but only on your last spin do you have a shot at that.

2. Random Wild: Between 4 and 10 extra wilds are added to the reels after which your win is evaluated again.

4. Mega Symbol: Reels 2, 3 and 4 merge after which you may be awarded a Mega Wild symbol, a Credit Prize, Free Games or the Hold Spin Bonus! 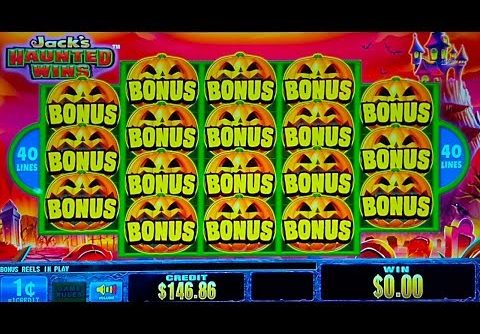