Someone is on fire! Hot sun fire! We have another Mega Win from Roshtein this evening. The new slot Inferno Star is on fire tonight! There is a bonus feature called Raging Sun. This can pay out a lot of money if you line up the raging suns just right. This is what happens in this clip. Another mega win from Roshtein, and this win was on €18.750!!! Play Inferno Sun Here

Do you like to see classic symbols such as lemons and delicious berries on the wheels, and would like to see them in a classic environment? Welcome to the Inferno Star Video Slot from the game maker Play’n GO! Here, traditional cherries and lovely watermelons have been placed in an arcade-inspired environment. With five paylines and a re-spin feature, it can heat up properly on the wheels. Read on to find out more about the game, the design and the special features offered.

As soon as you click on the game you will be met by brown-red wheels placed against a background painted in gold shades. The game plan is in the middle of the picture and it consists of five reels, three rows and five paylines that determine the winnings from left to right in the picture. Winning lines are fixed, which means that you do not have to decide how many you want active.

The first thing you need to do before you start playing is to adjust the bet amount. This is done via the control panel under the wheels at “Bet”. In the control panel you can also see how much you have won and make settings for convenient autoplay that starts immediately when you click on “Auto”. (You will not enter any kind of menu selection to adjust the number of spins you want to make, but simply click on and off the auto spin with the same button.)

Inferno Star is a Video Slot inspired by the older, classic slot machines for that reason, the game does not provide too much special features. Instead, the main focus is on the possibility of activating the re-spin function. This function is activated if the Scatters symbol lands on the middle wheel, that is, the third wheel, which will thus also be stuck during the entire remaining Spin is rolling.

As previously mentioned, the game has five fixed paylines that give dividends from left to right in the picture, and the sum paid out is based on the exact value of the symbols and the sum you have chosen to bet yourself. At least three matching icons are required for a win to be allowed to be shaped. In the paytable you will find watermelons, cherries, grapes, lemons, plums, apples and fireballs. 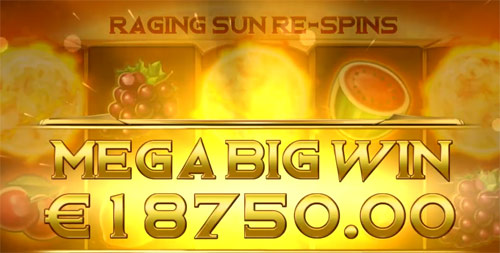