Jack and the Beanstalk

The tale of Jack and the Beanstalk hasn’t really aged well at all, has it? I was first exposed to it through the always wonderful Disney adaptation where Mickey Mouse and his friends are suffering from horrible famine to the point where Donald tries to eat a live cow and has to be subdued by Mickey and Goofy, after which he bursts into tears out of sheer despair. You know, for kids! In that version, the characters buy some magic beans which transport their house to the skies through a large beanstalk, placing them in the castle of a rich giant who is also kinda sorta evil.

Definitely one of the most unique features of this slot is the so-called Walking Wild. After that, the Wild will move a reel to the left and you get another spin, until it completely leaves the stage, in which case you’ll get one last free spin before the game goes back to normal. It’s brilliant, and I love it!

Screenshot from Jack and the Beanstalk

But besides that, there’s also a completely ordinary Free Spins round which is activated by getting three Scatter symbols, represented by a chest with purple gems inside. There really isn’t much to say about it because it’s rather standard – once you get the Scatters you automatically go into free spins, and getting 3 more Scatters during the bonus round earns you 5 more spins. So there’s no multipliers, no bonus rounds, no games, it’s about as basic as it gets. Which, honestly, isn’t that bad – I’d say that I commend NetEnt for keeping it nice and simple instead of trying to shove in some terrible and uninspired bonus games just because it’s expected of them. While I would’ve certainly liked to see a bonus round of some sorts (maybe involving Jack climbing the Beanstalk and collecting rewards along the way? Call me, NetEnt!), I’m not too bothered by their absence.

Experience of Playing the Slot and Other Recommended Games
While it’s definitely not the greatest slot ever made, “Jack and the Beanstalk” is one that is worth at least your curiosity. Its visuals are pretty and colourful in ways that few other slots’ are, and while the bonus features that make it unique are tiny and not all that glorious, they’re still rather well executed and well-crafted, and they add some much needed variety which, in a world filled with nearly identical slots, is a breath of fresh air. I’d say give it a few spins, see if it’s your thing, and if you find out that it is, then awesome! If you find out that it’s a bit too simplistic for your taste, though, there are other NetEnt slots you could try out. A great example is Gonzo’s … 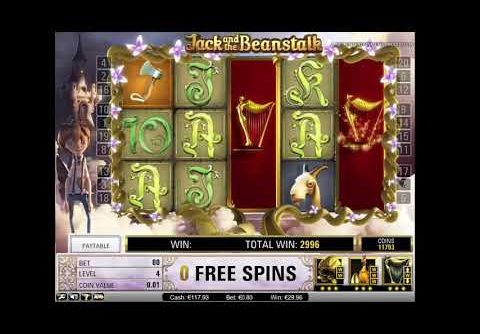