Not played much online for a while so decided to check out a new game – Ted Megaways. I’ve not played this one before so was testing the water on low stakes, obviously this would be the time I got a decent bonus!!

Having played it a bit now its a bit similar to Kong and some of the other Megaways games. It randomly chucks in mystery symbols and it’s 4 bonus symbols to trigger the feature. Once you’ve got the Thunder buddies bonus (which did take quite a while BTW) you can either collect for 12 spins with a normal start, or you can gamble on the Thunder Wheel for a mystery start. I went for the gamble, and ended up with upgraded megaways, but fewer free spins.

As per most of these games, the big wins come when you get the multiplier upgraded and hit a decent screen of symbols. The potential is clearly there, but from first play it does seem like the bonus is a bit reluctant to come along.

I finished nicely ahead this time, but then again I was due some luck!!

I’ve got a few more videos from the weekend to sort out, will get those up asap as well… 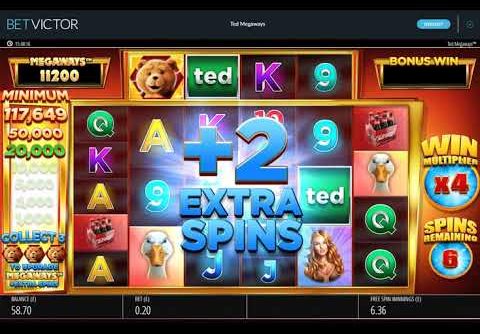