The Rhino Blitz slot is played on a 6 reel, 4 row, 4,096 ways to win machine. To form a winning combination, you need to land 3 or more lower value royals or 2 or more high value animal symbols from left to right on adjacent reels, starting from reel 1.

The grassy plains of the African savannah are the setting for the Rhino Blitz slot. Visually, it looks rather like Buffalo Blitz but with rhinos instead of buffalos.

There’s a sweeping orchestral soundtrack playing in the background while you spin which ramps up the atmosphere. The design here isn’t flashy but it’s solid enough.

The reels are made up of A to 9 royals and an assortment of more rewarding animal symbols. In order of value are the antelope, monkey, gazelle and lion. The golden rhino is the most lucrative standard symbol. Land 6 of these in combination for a payout of 7.5 x your total stake.

The diamond symbol is the wild. This doesn’t deliver any payouts in its own right but it does substitute for all the standard symbols when it makes up part of a winning combination. Finally, there’s the Free Spins scatter symbol. Land 3 or more of these to activate the game’s main bonus feature.

Flip your tablet or smartphone into landscape mode and the 6 reel, 4 row game engine fits perfectly. The unfussy visuals also work just fine on the smaller screen devices, as does the straightforward gameplay. The Rhino Blitz mobile slot is simple and very easy to follow.

Rhino Blitz Bonus Features
The gameplay in Rhino Blitz is relatively straightforward. With 2 bonus features, the main extra is a free spins bonus where your winning chances are boosted with the arrival of mystery transformed symbols which come with multipliers attached. 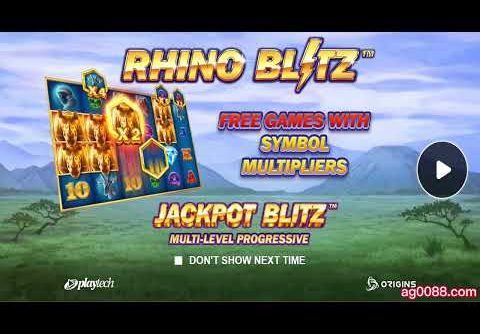