The Super Goose slot machine by Ainsworth is part of what I call their “Goose Trilogy” along with “Crazy Goose” and “Loose Goose” all of which look and play very similar, but differ in the way they do their bonuses!

Like the others, Super Goose is very volatile with the base pays very low, requiring you to get the Free Games bonus or the Mega Goose feature to really do well. At least on the version I played, Major and Minor random progressives were available which hit at the conclusion of any paid game, if you’re lucky, of course! The Mega Goose feature is triggered by receiving the Mega Goose symbol in reel 3 which then fills reels 3, 4, and 5 with wild symbols. Of course, you need a line in reels 1 and 2 in order to profit although it’s a cool feature. Unlike other Ainsworth slots, Loose Goose and some of its cousins features a row less in reels 1 and 2, somewhat reminiscent of WMS’s Money Burst line.

The bonus is triggered by three or more golden egg symbols which awards you 6 Free Games. During the bonus, a new “Goose” symbol is introduced which at the conclusion of the spin is replaced by the same symbol. During games 1, 2, and 3, the Goose symbol will appear on reel 1. During free games 4 and 5, the Goose symbol will appear on reels 1 and 2. Game 6 adds the Goose also to reel 3. Game 7, if triggered, adds Goose to reel 4, and Game 8 and beyond, if triggered, will fill the screen with the Goose symbol! Now what makes things interesting, is that commencing on spin 6 through the remainder of the bonus a bonus reel appears with either “x2”, “x3”, “x2 with Spin Again”, and “x3 with Spin Again”. Basically spin 6 becomes a “sudden death” proposition and the question is, how long can you keep your free spin streak going, and win full screens?! To add even more spice, beginning with the 8th and all subsequent games, Goose will be replaced only be premium symbols, as you will see, Enjoy! 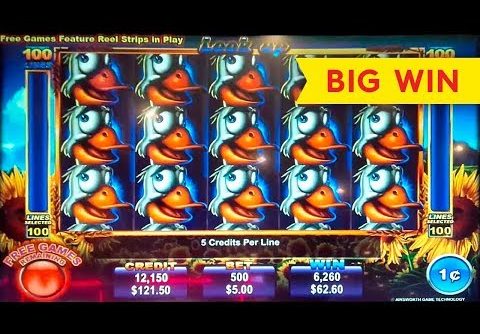