David Labowsky hade a nice evening yesterday with some nice wins on different slots, but the big one was on Recatoonz with a nice 16k hit, A Garga win with 15 pink toons! You can play Reactoonz here.

In Reactoonz Video Slot, cute, crunchy, peculiar and imaginative monster-like aliens have taken over the playing field and help you along the way to winnings through so-called cluster payouts. The game is similar to its predecessor Energoonz Video Slot, which was also populated by similarly small crunch balls of different colors. You do not need to be a professor of quantum physics to take advantage of the Implosion, Alteration, Demolition or Incision features – here you are guided by energetic Reactoonz.

Reactoonz features
As soon as you click on the Reactoonz Video Slot you will be met by various monster-like figures in a grid of seven vertical and seven horizontal lines. You get payout when five matching monsters land next to each other and form a cluster. When a winning combination arose, the symbols included in the prize cluster are replaced, and new characters fall down on the plan to take the place of the old symbols. In this way you can get additional profits on the same Spin. The ingenious characters have different shapes and colors. Some only have one eye while others have three, but all have a smile on their lips. Four similar mini-monsters next to each other in a square pattern turn into a single big symbol, a so-called Giantoonz, which gives you double the win as it is part of a winning cluster.

Alongside the playing field there are meters that are filled in as well as one of the four different special functions.

Reactoonz Freespins and Bonuses
When winning clusters are formed on the playing field, a meter called “Quantum Leap Charge Meter” is filled up. When the barometer is at max, one of the following Quantum features is triggered:

Demolition: All matching symbols and all one-eyed monsters disappear from the game board and are replaced by new icons, which also means new chances of winning!

Implosion: Between three and six monsters turn into Wild symbols that can replace other icons in the quest for winning clusters. In addition, all adjacent symbols are destroyed and replaced with new ones.

Alteration: A one-eyed monster is selected to transform all matching symbols into another icon, thus resulting in new profit clusters.

Incision: The monster in the middle of the game board turns into the Wild symbol and two electrically charged lines in a cross over the entire screen are created. All icons that touch the lines are transformed into one and the same symbol and chances for new matches are thereby created.

To the right of the game board is not only the barometer that can be replenished until one of the special functions is activated, but also the monster Gargantoon. When the wheels do not spin, he snores loudly, but when you click on the Spin button, he sniffs at the playing field, smiles at you, makes a whim or looks dreamily up against the sky. If you are lucky with the winning combinations, he can take a break from his place next to the wheels and place himself on the pitch as a giant Wild symbol. Initially, he occupies three positions in each direction (that is, a total of nine icons) and then divides into a size of a total of four icons. After a third split he has given you proper assistance on the way to the winnings.

Reactoonz payout
Reactoonz Video Slot has 7 reels, 7 rows and gives payout as matching symbols end up in clusters, so-called “Cluster Pays”. A symbol is part of a cluster in cases where it vertically or horizontally matches the sign next to it. At least 5 symbols are required for a winning combination to occur. Below the game board is the control panel where you can set your bet and see how much you won. At the bottom left of the picture, under the icon with several horizontal lines, is information about the game rules and the special functions.

Reactoonz graphics and sound
Reactoonz Video Slot has a sweet, energetic theme with little monsters reminiscent of aliens. The feeling of the game is humorous and the figures are imaginatively designed in all colors and shapes of the rainbow. One of them is orange-yellow with thick red horns, another is one-eyed, round and handy. The animations are exemplary with flashing symbols, crackling energy fields and spinning lightning balls. As the background is tastefully navy blue, both the effects and the colorful monsters are clearly visible. Easy-going music sounds while you play, and contributes to the carefree, fun atmosphere of the game. 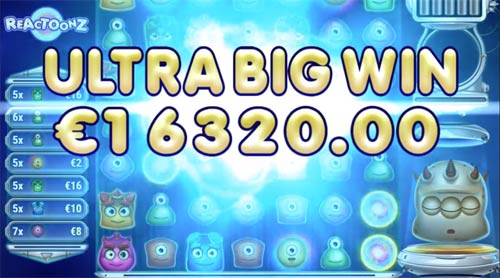