MASSIVE MULTIPLIER on the Buffalo Stampede slot machine by Aristocrat!

Buffalo Stampede is a classic version of Buffalo where you win by landing 2 or 3 of the same symbol on adjacent reels from left to right, starting from the leftmost reel, and depending on the symbol. To help, wild symbols may land on reels 2, 3 and 4. Additionally, randomly, a wild symbol may transform into a 2x wild symbol!

The Stampede Feature is randomly triggered where between 1 and 2 additional reel positions will be surfaced on top of a random number of reels. In addition, randomly at any time 1 or 2 Buffalo may be added to the top of the reels, too.

The Free Games Bonus is initiated by landing 3, 4 or 5 bonus symbols for 8, 15 or 20 free games respectively. During the bonus, any wild symbol that lands will transform into a 2x, 3x or 4x wild. Retriggers are possible by landing 2 or more bonus symbols.

Finally, Major and Minor Jackpots may be won on any bought spin at any bet level!

What an awesome win on an awesome classic, I just loved scoring that awesome multiplier and I even scored a HIGHER one resulting in an awesome Jackpot on the new and great Buffalo Link, check it out: https://www.youtube.com/watch?v=pU9MTOjpbvk 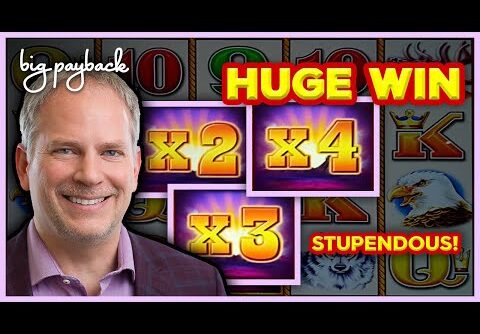