The Record Jackpots slot machine by WMS is part of their “Top Star” family of slots, along with Chili Pepper Party and Tiger Kahn, with the latter being their most popular title in this series. These machines are quite distinctive as they have a “Star Topper” on the top of their cabinets which serves to award you a number of free spins and a multiplier for those free spins during the bonus. In addition, during any standard game where the Star symbol does not appear on reel 3 you may be randomly awarded the Mystery Multiplier feature where a multiplier of either 2x, 3x, 4x, 5x, or 10x is chosen for you and applied toward one spin. My question is, if you trigger the standard bonus during that spin, is your multiplier applied just toward your triggering spin or toward your full bonus? Also randomly after any spin, you may be awarded the Major or Minor progressive. What you really want, though, is to trigger the primary Top Star bonus by landing Star bonus symbols in reels 1, 3, and 5 where you will then be randomly awarded a number of spins from the Star topper: and this can happen between 1 and 5 times! After your total number of spins have been determined, you are then awarded a multiplier of either 2x, 3x, 4x, 5x or 10x and this is where it gets interesting because if you can pair a lot of spins to a high multiplier, well, the sky’s the limit! Retriggers are possible and award the same number of spins that you originally triggered the bonus with, another great feature! All in all, a great game with super potential, Enjoy! 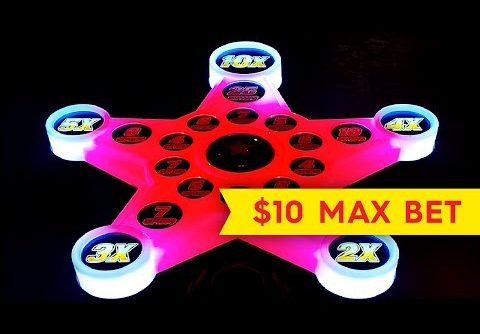