Big Red Deluxe is a very interesting game where you win by landing winning paylines and to help, wild symbols may land on reels 3, 4 and 5. All wins begin with the leftmost reel and pay left to right on adjacent reels, including scatters.

This particular version of Big Red Deluxe was the Sapphire Edition, which included a Jackpot Feature where randomly during any bought game, 3 crowns will appear at the bottom of the screen and they will rotate to either reveal “Feature” or a blank and if all 3 reveal “Feature” a Pick screen is awarded and you choose one for either a Bonus Prize between 1 and 5 times your bet or a Sapphire and if you find a Sapphire it will then reveal either the Grand Jackpot, Major Jackpot or Minor Jackpots or a Bonus Prize between 7 and 10 times your bet.

The “Repeat Win Free Game Feature” is triggered by landing a winning payline with the wild symbol. 5, 6, 7, 8, 9 or 10 free games are won for each lit line where one or more wild symbols substitutes in a win. Each Scatter Symbol that lands during the free games repeats the amount won that triggered the free games. All free games will be played on max lines so this could be a “Less Lines” candidate. During the bonus, extra wilds are added to reels 3, 4 and 5.

It’s all about a 5-of-a-kind bonus trigger with Big Red Deluxe and to see the ULTIMATE 5-of-a-kind win, check out my Grand Jackpot victory on Quick Fire Flaming Jackpots – Pharaoh’s Ransom: https://www.youtube.com/watch?v=NontcOQmrbA A true Unicorn for sure! 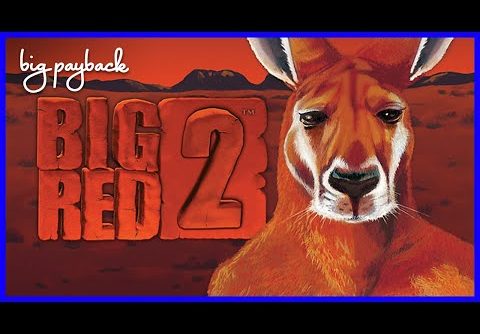