A 3rd attempt at the NEW Huff n More Puff Slot Machine by SG Gaming! Chasing the Mansion Feature. In my 2nd attempt, I got a full screen of the hats with the Mega Hat feature! This new sequel has lots of cool features. The base game is the same as the original version. Played in a 5×3 reelset, you need 6 scattered hard hats to trigger 6 free games. The hats start off as straw frames. If you land another hat on top of it, it becomes a wood frame. Land another on top of that and it becomes a gold brick frame. Any more hats that land on top of it award 10x your bet. 3 hats give an additional free game. After the spins end, you get prizes based on the type of house built. Wood houses and mansions can award coins for bonus prizes and progressives.

New to this version is the wheel bonus up top, triggered by 3 scattered buzzsaw symbols. You can get bonus/progressive prizes, the Mega Hat feature, the Buzzsaw feature and the Mansions feature. In the Mega Hat feature, giant hat symbols can land starting you off with 4 to 15 positions. In the Buzz Saw feature, the bonus symbols move to the right and activate all symbols to the right of it. If a buzz saw goes over a previously activated symbol, it gets upgraded. Finally, there is the mansion bonus. At the start, the triggering symbols become mansions. Then, when any additional hat lands it immediately becomes a mansion. Finally, if a hat lands on an existing mansion, instead of paying 10x, it moves to another open position and becomes a mansion. Taken at Yaamava casino/hotel in Highland, CA.

Jackpot Handpay in Invaders Attack from the Planet Moolah: 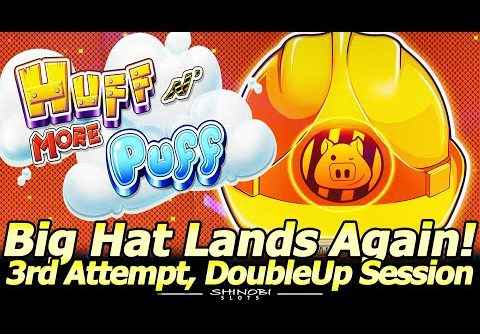