Live Play and Bonuses in the NEW Treasure Ball DuoLuck Gorilla Riches slot machine by Konami. in this new version of Treasure Ball, there are 2 dragons now, a crystal one and a gold one. It’s triggered randomly like before. In this new version, there are blue balls in addition to the red, gold and crystal ones. Blue balls give you free games along with added coins for the bonus. The dragons can sometimes turn the wheel to gold and crystal spots guaranteeing at least one of those land. Balls can also randomly upgrade. In the Gorilla Riches game, it’s played in a 5×3 reelset. If at least 3 scattered coins land, you win the sum of the prizes shown. 3 scattered bonus symbols trigger free games. During free games, 3 or more coins that land trigger the gorilla feature. He’ll stomp the reelset, and every time he does, the coins flip and can change value! So it’s not just a repeat feature like I thought it was at first. Fun new version with alot going on. Taken at Yaamava casino/hotel in Highland, CA. 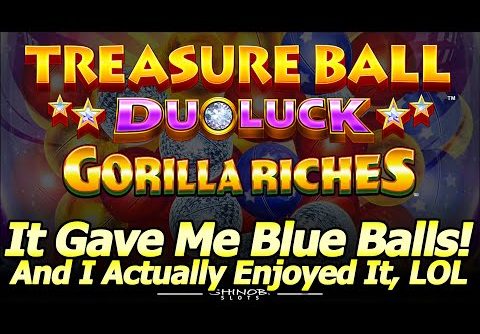