This is the Fire Opals slot part of the The Winner’s Choice 2 slot machine by IGT allows you to play up to 4 classic games at once although Mystical Mermaid, Kitty Glitter, Coyote Moon, Fire Horse, and Stinkin’ Rich are all available. The games play just like they do in their stand-alone versions, and in the case of Fire Opals, you want the bonus or a great win in the standard game, as you will see! Fire Opals plays similar to the very popular Siberian storm slot, although bonus symbols aren’t stacked in this one, so the most you can win on any one spin is 10 free games, which is triggered by landing one bonus symbol in each reel. Fire Opals pays left-to-right and right-to-left where you need at least 3 of the same symbol(or wilds) to win. Having multiple symbols in a winning combination multiplies your win. The “Fire Opal” symbol itself is top symbol, and pays more than the top symbol in similar games for a 5-reel hit, which comes into play as you will see!

So why play Winner’s Choice 2 at all if you’re essentially just grinding yourself out? Well, of course the primary answer is to have fun as playing 4 games at once can be a lot of fun! Although there is another reason although it is a bit of a long-shot: Randomly at the conclusion of a game you may be awarded the Mystery Bonus which allows you to spin a wheel for a free bonus game! What’s cool is that you also have a chance to be awarded MORE than the standard amount of free games: for example with Kitty Glitter, you can be awarded the standard 15 games, but also 20 or 25 games! And unlike other games where being awarded extra spins is just like winning a second bonus game, with Kitty Glitter, it’s exactly what you need for that Big Win as more spins in this game are extremely valuable based on the way the game plays- see this video to see why!

All in all, I’m nor sure if that’s reason enough to play it, but it sure is enticing on some levels! As I recall, the original Winner’s Choice also had progressives in the wheel spin and I’m not sure if this version always doesn’t have them or just the particular version I played, but that would have been a nice touch! I can’t help but feel IGT can turn this concept into a successful franchise with a little more work on the way the bonus would play: maybe next time, Enjoy! 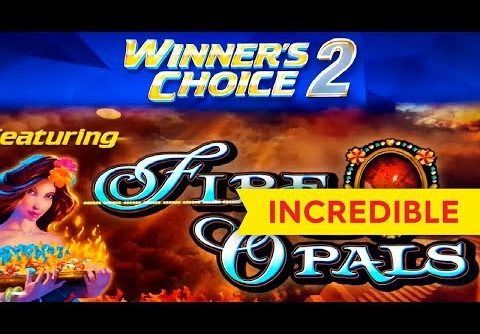