Cash Burst Orb of Atlantis is an interesting game, where you win in the base game by landing winning paylines and whenever one of the special “Cash Burst” symbols land on an orb. Orbs can be randomly placed on the reel set on any spin and then progress upwards after each additional spin, similar to the play mechanic made popular by Ocean Magic. The real fun though is with one of the special features of the game:

The Jackpot Feature is initiated by landing 3 more scattered bonus symbol after which a Pick Field is displayed with 12 options where you choose until you match three for a Progressive. Where you pick doesn’t matter, it’s all just for fun!

The Super Orb Free Games Bonus is initiated by landing 3, 4 or 5 bonus symbols for 8, 15, or 25 free games respectively plus a scatter award, too. During this bonus your reel set expands to twice its regular size and “Super Orbs” are introduced, which can occupy up to a maximum of 5×5 reel positions! Retriggers for 3 additional games are possible by landing 2 additional bonus symbols, as you will see. So much potential with this one!

Cash Burst is an interesting game as is Cash Falls Pirate’s Trove, a game where I scored a great win on a rare bonus, check it out: https://www.youtube.com/watch?v=OgEqfNEjdmI 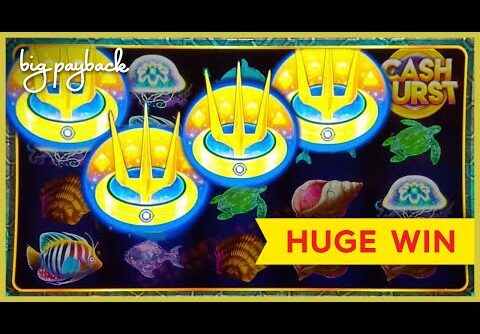