UP TO $20 BETS on the Solar Disc slot machine by IGT!

Solar Disc is an extremely fun game where you win by landing winning combinations on paylines. Where things get interesting is with the special Solar Disc Feature, which is triggered when any Solar Disc symbol lands on reels 2 thru 6 after which one symbol that’s on the screen is randomly chosen and made wild!

The Free Games Feature is triggered by landing the special Bonus symbol on reel 1 and in addition, at least one Solar Disc symbol on reels 2 thru 6 after which 10 free games are awarded without the possibility for retrigger. During the bonus, any reel where you originally landed a Solar Disc symbol will be guaranteed to also have one during the bonus, so you can imagine the potential if you trigger the bonus with two or more Solar Discs! Filling the Screen with wilds will yield the Top Award of 500x your bet, and while I didn’t do that well, I had my shots during this High Limit session and will likely take another shot with this one!

I want to crack Solar Disc which means triggering the bonus at the $20 level and landing more than one disc for what would be an awesome Jackpot! This is not my first time playing Solar Disc as I already had an awesome session as you can see here: https://www.youtube.com/watch?v=-dZBzo5VqVs And how about that Mistress of Egypt, an awesome win here too, almost a Full Screen of Wilds: https://www.youtube.com/watch?v=uugFSvFHBck 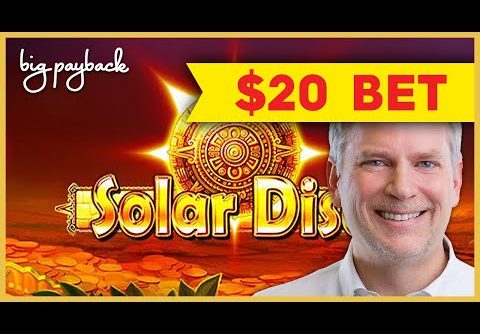