The Midnight Eclipse Slot Machine by IGT is an interesting game and I finally was able to get a true Big Win Bonus on it, although sadly at a lower bet level, of course! This Midnight Eclipse slot video first shows some $12.50 higher-limit action and then a 100x bonus!!

The Midnight Eclipse slot on some levels is typical IGT- employing the “Split Symbols” feature- where any symbol in any reel can count between one and three times so even though there are only 5 reels, you can have line hits of up to 15 symbols of a particular type during the standard game! So far so good- a similar feature is employed in the popular “Cats” slot machine and many other IGT slots. Where the game gets a little deceptive is in the bonus, which is initiated by getting bonus symbols in reels two, three, and four during the standard game. The bonus does not allow for retriggers and once triggered, you receive 6 free games. During this free games feature, any wild symbols you get remain sticky throughout the remainder of the bonus and additionally, they “increment” after each spin going from wild, to double wild, to triple wild! So far, so good, right? But while the symbols look essentially the same, the payouts are DRASTICALLY cut from a top award of 1000 for a variety of line hits to a paltry 100. And if that weren’t enough, higher-end triple symbols don’t even appear in the bonus, with the exception of the triple wilds symbol. Consequently, for the bonus to pay anything substantial, you need to essentially fill the screen with wilds right from the start or you’ll end up with very little. Shame IGT, shame- for not using obviously different symbols during the free spins bonus and for the life of me, I don’t recall any other game pulling anything similar- does anyone else? And finally, I was able to get a great bonus on this one, Enjoy! 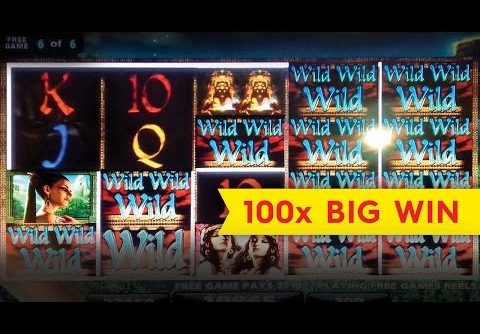