Multiple sessions playing Cash Express Luxury Line, both the Buffalo and TimberWolf versions. The base games are normal Buffalo and TimberWolf. When triggering bonus you get the choice between the normal bonus and the Luxury Line feature. In the TimberWolf bonus, you only need 2 symbols to re-trigger while in the Buffalo Bonus, you get 2x/5x multipliers. At least one credit prize or train symbol on reels 1-4 AND a star or gold train symbol on reel 5 trigger the Luxury Line feature. Credit prizes are awarded with the star symbol, while the total of credit prizes is multiplied by 3x to 10x with a gold train. Colored trains have varying number of cars and available prizes from Mini to Minor to Major to Grand. The colored trains run first and the total of their prizes plus visible credit prizes are then awarded via a star symbol or multiplied 3x-10x with a gold train symbol. Though not having great success in this game, I really like how it works. There’s alot of variety with the different trains and combinations, plus you can choose a regular style bonus if you choose. Taken at Yaamava casino/hotel in Highland, CA. 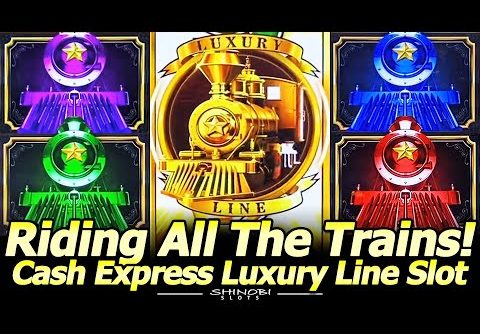 12 thoughts on “Riding All the Trains in Cash Express Luxury Line Slot, Buffalo and TimberWolf with Triple Up!”