The Spin It Grand – Fabulous Riches slot machine by Aristocrat is solid!

There is a trend in slot design where a base play mechanic is developed and then multiple machines are created with different themes with many times slightly different bonuses. Spin It Grand follows this model and this slot video showcases the “Fabulous Riches” theme.

The base features of Spin It Grand are as follows: it’s a lines-based slot where you win by landing winning pay lines. In addition, there are two special features: the primary “Spin It Grand Feature” and the “Free Games Feature”.

The Spin It Grand Feature is common between all themes and triggered by landing 6 or more special bonus symbols, very similar to what you need to do in Lightning Link. Once triggered, 10 reels appear and 3 spins are awarded where any bonus symbol that lands is held and the spin count is then reset to 3. This continues until you’ve landed all reel positions and if so, you are awarded the Spin It Grand Jackpot. If you don’t land all 10, then after your spins are complete the Spin It Grand Reel is triggered for one spin, where each of your reel positions will be awarded a credit prize or the Major or Minor Progressive. Once again, just like in Lightning Link, the Major and Minor progressives depend on your bet denomination, where higher denominations will yield higher Progressives. This all sounds more complicated than it is: once you watch this video or trigger the feature once, you’ll get it!

The Free Games Features is triggered by landing 3, 4, or 5 bonus symbols for 10, 15, or 25 free games respectively. During the feature, bonus reels are in play and all non-premium symbols are removed, giving you a better chance to “Fill the Screen” for that Big Win or Jackpot. Retriggers are possible, and the Spin It Grand Feature will occur more frequently during the bonus than a regular paid game spin.

Finally, during the base game, landing 4 or 5 bonus symbols will trigger the “Bonus Increase” feature, where a random flame segment will be chosen and increased a random amount between 1 and 18 multiplied by your total bet.

All in all, a lot to take in, and a very fun game to play with great potential, Enjoy! 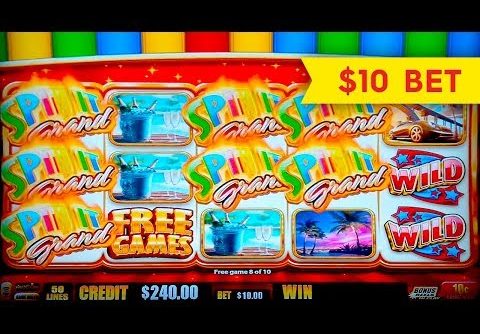